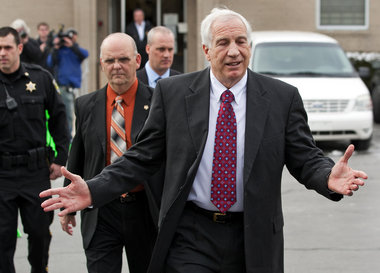 Now, the national discussion should focus on what we need to do to return to a society of people who see wrong and try to stop it, to paraphrase Robert F. Kennedy. Instead, we are a nation of bystanders — afraid to stand up, afraid to speak out, afraid to do the right thing or make the right call.

Those in power bank on us to see nothing, say nothing and do nothing. There was no power greater at Penn State than the one that resulted from the unholy alliance of deniability between university leadership and a profitable football program. It is a microcosm of what is wrong with our country.

For all the academics and sports that are taught on college campuses, we need to include more empathy, morals and ethics instruction. Penn State and other schools can take this opportunity to reverse an empathy deficit and espouse both kindness and advocacy. But empathy can take us only halfway to the goal line. The other half of the lesson is that college students/teens need to be taught how to take action, be courageous, intervene and stand up and speak out. Being empathetic is largely ineffective and meaningless to the victim — if we don’t act.

The administrations need to be fixed, too: Individuals need to be trained and prepared for making the right decisions if/when the next situation presents itself.

Penn State President Rodney Erickson said: “We remain committed to our core values.” But values are not enough if they just exist on a wall plaque. The entire university community needs to learn empathy and then be empowered to act. Only then do values become behavior, and kids, in this case, might be spared millions of lifetime moments of agony.